Philosopher of the Heart

The Restless Life of Søren Kierkegaard

0 hodnocení Philosopher of the Heart 0

´This lucid and riveting new biography at once rescuses Kierkegaard from the scholars and shows why he is such an intriguing and useful figure´ - Observer.
Søren Kierkegaard, one of the most passionate and challenging of modern philosophers, is now celebrated as the father of existentialism - yet his contemporaries described him as a philosopher of the heart. Over about a decade in the 1840s and 1850s, writings poured from his pen analysing love and suffering, courage and anxiety, religious longing and defiance, and forging a new philosophical style rooted in the inward drama of being human. As Christianity seemed to sleepwalk through a changing world, Kierkegaard dazzlingly revealed its spiritual power while exposing the poverty of official religion. His restless creativity was spurred on by his own failures: his relationship with the young woman whom he promised to marry, then left to devote himself to writing, haunted him throughout his life. Though tormented by the pressures of celebrity, he deliberately lived amidst the crowds in Copenhagen, known by everyone but, he felt, understood by no one. When he collapsed exhausted at the age of 42, he was still pursuing the question of existence: how to be a human being in this world? Clare Carlisle´s innovative and moving biography writes Kierkegaard´s remarkable life as far as possible from his own perspective, conveying what it was like to be this Socrates of Christendom - as he put it, living life forwards yet only understanding it backwards. Review. This lucid and riveting new biography at once rescues Kierkegaard from the scholars and makes it abundantly clear why he is such an intriguing and useful figure: that we want, above all, to be reassured about our lives rather than find out what about our lives matters to us. ... Carlisle writes with verve and sympathy. Kierkegaard´s life is exemplary, as Carlisle shows with such plain and accessible eloquence (Adam Phillips Observer). It is a testimony to her skill that, as in a great novel, the portrayal of her protagonist is so vivid ... She wonderfully conveys how, pelican-like, Kierkegaard tore his philosophy from his own breast (Jane O´Grady Telegraph). Clare Carlisle has an especially deep admiration of Kierkegaard and has studied his work with an intensity that has rarely been matched. Her book, she writes, \"takes its shape from the Kierkegaardian question about how to be a human being in the world\" (Ray Monk New Statesman). Kierkegaard emerges as the sort of self-absorbed eternal student familiar from philosophy departments across the world... readable and entertaining (James Marriott The Times) 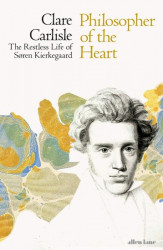 Recenze produktu Philosopher of the Heart